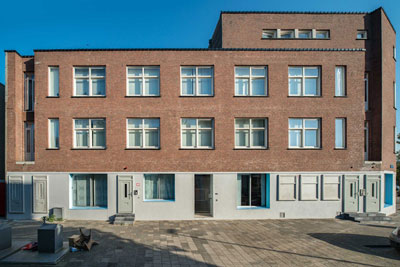 Millinx2 is an adaptation of our earlier Millinx project. The building, recently renamed as Thuishaven Charlois, was given an office function, next to 18 studios for people who used to be homeless. The formerly homeless get a temporary home in one of the studios as well as guidance from volunteers of foundation De Ontmoeting, to help them to adjust to a situation of more normality. Even though the main function of the building, housing people who have suffered societal problems, has remained the same, the philosophy behind the offered care is radically different. In the previous situation, introversy was an important part of the brief for the design. The dwellers were ex-psychiatric patients who needed to reduce impulses from the outside world, and were given access to their studios via a backyard transformed into a courtyard. The new situation required the dwellers to enter their studios directly from the street. The courtyard became the territory of the office.With this intervention, Millinx2 has become the transformation of an earlier transformation. Some of the most characteristic elements of the first intervention were concrete ornaments shaped as the counter form of original wooden doors, placed in the door openings that needed to be closed in order to achieve the introverted character needed then. These ornaments had to be replaced by real doors again. However, in stead of returning to the original doors, these new doors were shapes in the same counter mold as the concrete elements, inducing a series of references to a close history. Wooden doors representing concrete ornaments representing wooden doors.

In the interior, radical changes were also accompanied by the conservation of familiar elements. The subdivision in four separate living rooms and their consecutive staircases, necessary to allow for entrance of the studios via the courtyard, was abandoned to make room for an open plan with multiple vistas and maximum transparency. However, the closets with niches serving as seats, integrated in the architecture of the first transformation, remained, just as one of the wooden platforms connecting the interior with the court yard. The office, housing the foundation, has a back- and front office, in which clients can get a cup of coffee and an intake conversation in one of three glass cubicles. Show slideshow.