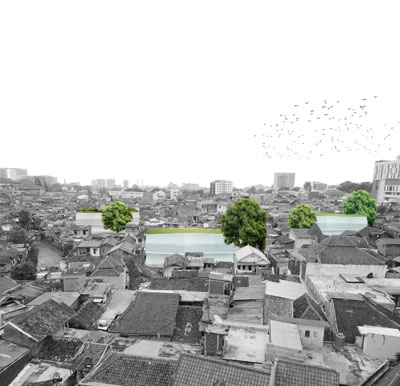 Bandung Block Restructuring is a pre-feasibility study for an urban renewal program in which home owners join forces to create green open space in dense kampong neighborhoods in Indonesian cities.
The study has answers for three important questions: how to keep home owners feeling secure about their property, how to facilitate self organization of the development by the community, and what building type will allow for higher density, extra, income generating volume, and green open space?

Krill put together a team with Toledo, consultant on financing mechanisms and Emik, a consultant in urban development participation processes. To investigate the architectural possibilities of the redevelopment, a study was made to the logistics of resettlement of the involved kampung dwellers. This lead to the conclusion that, due to limited availability of temporary replacement housing, a small-scale, plot by plot development was the most feasible process. As a result of this, the irregular shape of the plots is reflected in that of the building. The building type best fitting to the demands of the site and process is that of a stacked maisonette in which all apartments are accessible directly from the street. The densification could thus lead to an increase of build volume, while leaving considerable area for green open space. For a sample plot with 5 dwellings, a building could be designed in which each apartment increased more than 15% in area, while an extra sixth unit could be realized, and one of the five plots was completely greened. This unit is meant to generate income for the homeowners, and pay for the expenses of redevelopment.

With respect to subject of ownership, the choice was made to create a trust, similar to the Dutch VVE-system in which ownership of separate plots and houses is combined in one legal body, with the plot owners as shareholder. This possibility was found in the Indonesian Condominium Law.
For the multi-stakeholder process, the concept of serious gaming was embraced. A game was developed that was loosely related to monopoly, but adapted to enable co-design of the development.